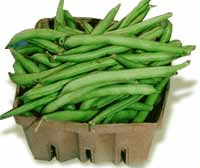 Phaseolus vulgaris, the common bean, string bean, field bean, flageolet bean, French bean, garden bean, haricot bean, pop bean, or snap bean, is a herbaceous annual plant grown worldwide for its edible fruit, either the dry seed or the unripe fruit, both of which are referred to as beans. The leaf is also occasionally used as a vegetable, and the straw can be used for fodder. Along with other species of the bean genus (Phaseolus), it is classified botanically into the legume family (Fabaceae), most of whose members acquire nitrogen through an association with rhizobia, a species of nitrogen-fixing bacteria.